The last eight days have been somewhat of a revelation.

On my birthday I made the decision to turn my back on 99% of all personal social media interactions for a year. “Yeah, yeah we’ve heard all that before JP” you say, and I can understand your scepticism; after all, I’ve made these same statements in the past (on Facebook etc), usually towards the end of the year in the shape of new year resolutions. Resolutions always get the better of me, be that losing weight, getting and staying fit, being a better husband, the list goes on. So when I announced my intentions to quit social media, delusional dreams of being an artist, a designer, a photographer and a writer, I knew that this time I had to make it work. I don’t want to be the guy that cries wolf any more.

My best friend came to stay with my family and I for a few days, he arrived on the morning of my birthday. Rhona was working due to a shift swap, necessary after I decided it was a good idea to have a day-trip to Milan the day before.  In fairness I did go with her boss to see a motorcycle launch, so it was good karma. Anyway, I was home on my own on my birthday, so it was great to see an old friend. I’d started to forget that taking the time to catch up with someone face-to-face is SO much better than half-baked instant messages and rushed phone calls.

We drank coffee and talked bollocks for an hour, before deciding to take the conversation to a near-by pizza restaurant.

That morning I had taken the time to delete all of the social media bloat-ware off of my Samsung S4. It felt good doing that, kind of like getting out of damp clothes and into warm pyjamas. Instantly I felt better about myself and about what I am hoping to achieve over the next year.  I’d also spoken to Rhona about making sure that we will always turn off our phones whenever we ate out. So as Spencer and I headed into the Pizza Hut, I did just that.

As we sat and ate, I became agitated. At first I couldn’t quite figure out what was going on. I just felt a bit twitchy?! Then it dawned on me, I was experiencing withdrawal symptoms. I couldn’t believe it. Because I didn’t have my phone switched on and in hand,  checking in and posting about how many slices of pizza I’d eaten and how nice the waitress was being, whilst trying to see if anyone had liked anything I might have blindly re-posted at some point earlier in the day; I was clucking!

I felt embarrassed and yet somehow vindicated. This was all the proof that I needed. I must have been such a pain in the arse over the last few years of smart-phone ownership. I dread to think about how many hours I’ve wasted staring blankly into a four inch screen. I wondered how many conversations had washed over me, barely being registered as I liked another “near-miss” video? FUCK!

The good thing is that the feeling of insecurity passed quite quickly. I resisted the urge to switch my phone on and to check for any sort of messages that may have been left for me. I enjoyed my lunch and looked forward to picking Karta up from school before heading to Canterbury to attend the launch of a new Skoda showroom.

The next day Spence and I decided to head over to Bluewater. We wandered about looking at all of the beautiful people as they whizzed in and out of shops, adding even more carrier bags to the half dozen or so they were already holding.

Before long lunchtime was foremost in our minds, and so we decided to try out the Yo-Sushi bar we found ourselves standing next to. This is when things started to go awry.

Neither of us had ever been in one of these establishments. The myriad of tiny dishes trundling around the place on a conveyor belt was mesmerising. It was a bit exciting I suppose.

After we had been seated and shown what to do, we decided to order some hot food, which meant we’d have to wait a bit longer that usual.

I reached for my phone (which was still switched on) and, without thinking, shot a selfie! Still it hadn’t registered. What the fuck was I doing? I then proceeded to send the picture to Rhona. What a tool! Still it didn’t register. WHAT THE FUCK AM I DOING??? 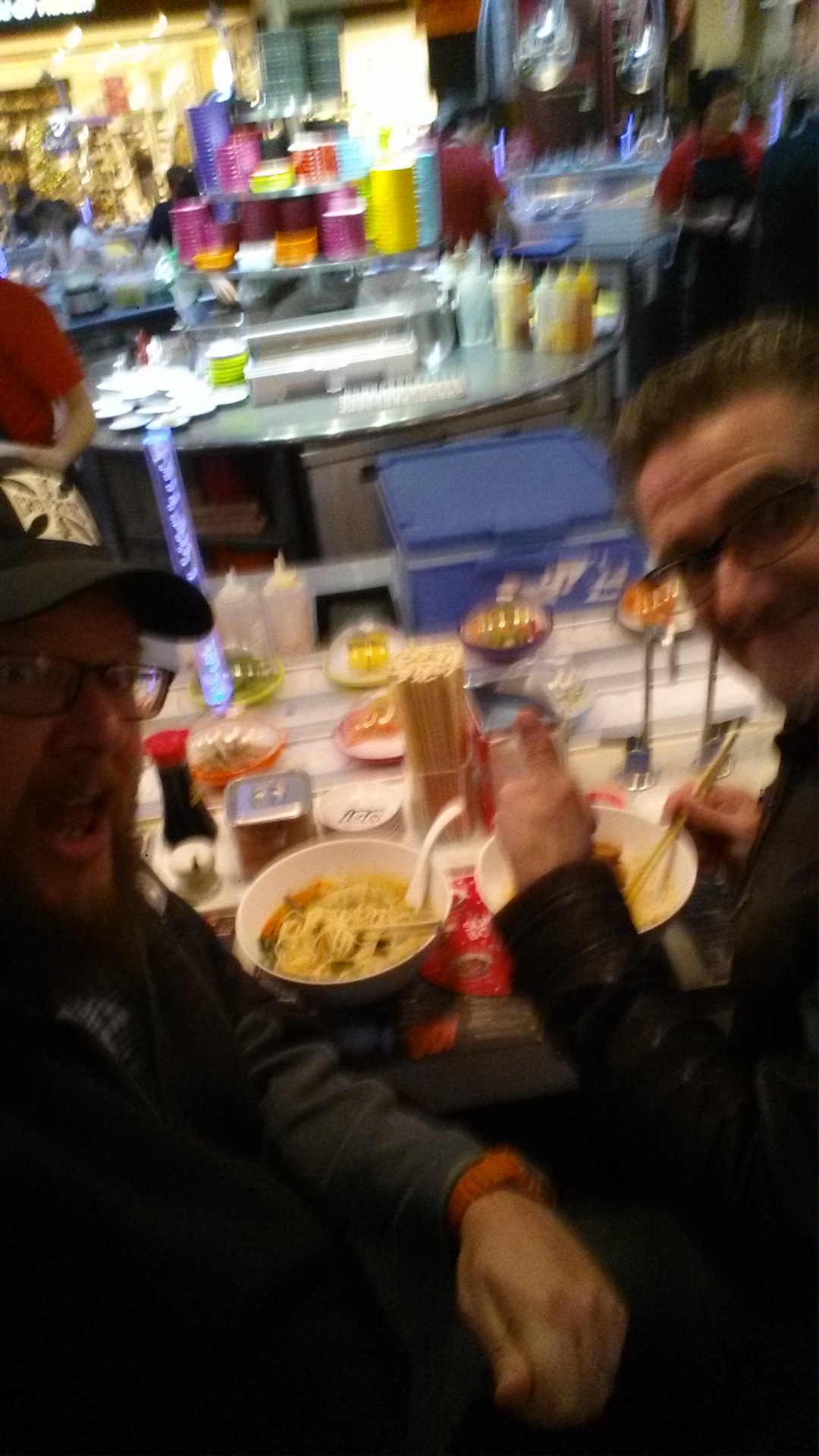 We finished our food and left the restaurant. Sure the food was great and the quirky nature of the place was intoxicating, but was that enough for me to have totally forgotten what I’d decided to do only the day before? I had slipped.

It wasn’t until we were in the car and heading home that I realised what I had allowed myself to do. I know I shouldn’t be so hard on myself, but I felt pretty bad. I can’t even get through 48 hours without slipping back into the clutches of the monster. It always needs feeding.

For the rest of Spencer’s visit I made a point of keeping my phone switched off. I resisted the urge to post anything anywhere about where we had been and what we had been doing. Instead I enjoyed the company of a dear friend and that of my family. That in and of itself gives me strength. I do have a sneaky peak at what you’re all doing on social media, I just don’t stick round for too long.

Life is too short.

Until next time, adieu my friends!

A Letter to My Son

Mid-Life Crisis: Why I’m Taking a Year Off