This is going to be harder than I thought!

I am becoming a hermit! Not the sort of person you find living in a cave somewhere in the foothills of the Himalayas, but more of a social recluse.

Last November I made the decision to off-load a bunch of stuff that I had been doing in my life. I decreed that I had been accumulating too much perceived responsibility for projects that had little or no value. They were and still are a waste of my time. Sure, I have learned a great deal of things in pursuit of these follies, however they were not, and in some cases, are still not leaving me fulfilled.

So I shouted from the rooftops that I’m going to leave it all behind, focus on the most important parts of my life and pursue those instead. Well that didn’t quite go according to plan. As with all good intentions, I started as I had meant to go on. I stopped “doing everything” and took a couple of weeks to re-evaluate how I was going to move forward. I removed Facebook and Twitter from my devices and began to make plans for Christmas and 2016.

Now with more time available in my day, I imagined that I would’ve had time to get back to reading books and catching up on some of my favourite movies. However throwing myself into the role of house-husband would see me getting up at stupid o’clock, making breakfast for my family, making packed lunches for them and then walking Karta to school. I’d then have to clean the house and do the laundry for the day. Once that’s done I’d spend some time doing the social media shizzle for Robinsons Foundry (the motorcycle dealer that my wife works at), catch up on the news and maybe watch a TV show whilst I take a spin on the indoor bike.

Before I knew it, it would be time to head out again to collect Karta, and either take him to an after school club, round to a friend’s house or back to the house. Once home I’d start to prepare the evening meal for the family, do homework stuff with Karta and try to finish any leftover chores from earlier in the day. As soon as Rhona got home, we’d eat, catch up and then start Karta’s bedtime routine. Once he’d gone to bed I’d jump back on the interwebs to prepare some evening social media posts, check e-mails and write for a while. Then it’s time to relax with Rhona in front of the TV for a while before heading to bed, and sleeping until it was time to get up & do it all over again.

As you can probably tell, this is a fairly standard day for a lot of people with a house-keeping role instead of a “real job”. I’m proud to be among your ranks, and very glad of the opportunity to make a real difference to the lives of the people that I love. Sure we’re not as well off as we could be if we were both working at full time jobs, but we’re happy and fulfilled.

Anyway, I’m enjoying my writing and have decided that I will try to maintain some of my blogs. The level at which I’ll produce articles and posts will be greatly reduced, after all I’m a busy man now. This is my biggest hurdle. I want to do far less and focus more on home making, the trouble is I’ve let myself get swept up in doing other stuff for other people. I’m asked to do this and that for them all of the time. Whilst I’m flattered at being considered for all of these “little projects”, they usually don’t pay well (if at all) and are very time consuming. All I want to do is pull back a bit and not be so accessible.

This is why I am embracing the life of a recluse.

So there you have it, 2016 has been okay so far. I’m not looking too far ahead, that would be foolish. Just for now I’m taking it one day at a time.

Until next time….. Adieu.

A Letter to My Son 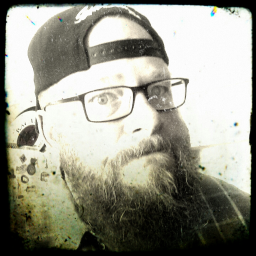